With the decision, Imlay City moves to 1-7 overall. University Prep Science and Math slips to 3-5. 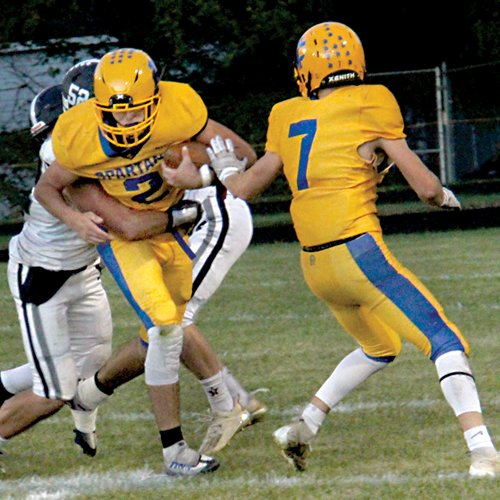 Imlay City’s Brady Vanderploeg, who had three touchdowns, sheds a tackle in a game earlier this season.

In Saturday’s meeting, Imlay City jumped out to a 13-0 advantage after one quarter was done and widened the gap to 20-0 at the half.

When the action resumed, Imlay City picked up where it left off. Aided by a 7-0 third quarter edge, the Spartans increased their cushion 27-0 with 36 minutes gone.

Imlay City then outscored University Prep Science and Math 13-6 the rest of the way, finishing off a favorable 40-6 verdict.

For the night, Vanderploeg completed four of seven pass plays for 60 yards as Imlay City’s quarterback. He threw zero interceptions en route to those numbers.

His accurate tosses went to three different targets. Their ranks consisted of Kade Vanderploeg (two catches for 34 yards), Danny Newsom (one reception for 17 yards) and Anthony D’Ambrosio (one catch for nine yards).

The Imlay City defense also registered a pair of takeaways. Brady Vanderploeg and Newsom (one each) furnished those.

Imlay City returns to action this Friday when it entertains non-league foe Flint Southwestern Academy. That meeting, Imlay City’s season finale, is slated to get underway at 7 p.m.