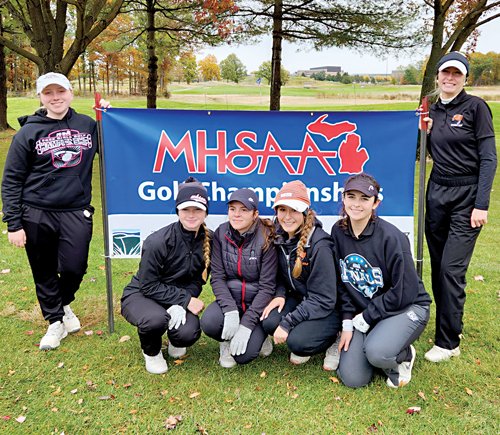 Almont took 15th at the state finals. They are front (L to R) Bella Moussiaux, Tara Tencza Nora Sinistaj and Autumn Bletch; and back Olivia Kotelnicki and Jesse Kautz.

ALMONT — The Almont girls’ golf team wrapped up a highly successful 2022 campaign with a 15th-place showing at the Division 4 state finals.

Play was contested last Friday and Saturday at the Meadows Golf Course on the campus of Grand Valley State University in Allendale.

Jesse Kautz led Almont with a 192 over 36 holes, good for the the 33rd best individual total. Her effort included an opening round 95 and a second round 97.

Olivia Kotelnicki logged the next best Almont showing. She posted a 212 output, including a first round of 107 and second round 105.

Bella Moussiaux (an opening round 114 and closing round 108), and Autumn Bletch (a first round 111 and a second round 113) were the other Almont players to tee it up over 36 holes.

Nora Sinistaj (an opening round 138) and Tara Tencza (a closing round 122) also represented Almont at the state finals.