Large field of residents to appear on Nov. 8 ballot

IMLAY CITY — City residents will have nine city commission candidates to choose from on the Nov. 8 election ballot.

Per city charter, the top three vote recipients will serve four-year terms on the commission, while the fourth-highest vote recipient will be elected to a two-year term. 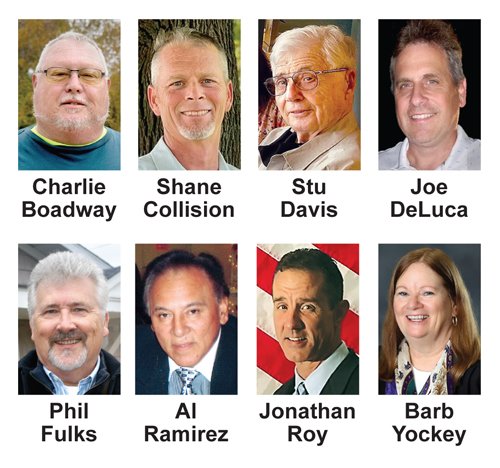 Charlie Boadway is a lifelong resident, whose contributions to Imlay City have been significant.

Boadway worked at Champion Bus for 26 years, while simultaneously serving Imlay City as a firefighter and Fire Lieutenant for 30 years. Boadway has donated his time and skills to servicing and maintaining the fire department’s fleet of trucks.

Having retired from the fire department, he remains self-employed while taking on various odd jobs.

“As a commissioner, I want to do what I can to keep up our municipal services during these tough financial times,” Boadway said. “I’m easy to get along with and willing to work with others to get things done.”

He listed filling the empty buildings in the downtown district as a priority for the city.

Shane Collison is a U.S. Army veteran who grew up in Imlay City and now seeks to serve his fellow residents as a city commissioner. The son of a former Imlay City Manager, Dennis Collison, Shane said he has the experience and knowledge of the community to contribute positively over the coming years.

“I understand how the city commission, mayor and police chief need to work together for the betterment of the city,” Collison said. “As a commissioner, I will be that voice, and to stand up and fight for our residents and their families.”

Collison is a strong supporter of Imlay City’s police and fire departments, DPW, wastewater treatment plant and city office personnel, but is dissatisfied with the city’s current management.

“The city’s greatest need is new management,” said Collison. “We need commissioners and management that best meet the needs of our residents.”

Stu Davis is another longtime resident who said he wants to do what is best for the citizens of Imlay City.

In addition to his time on the city commission, Davis has served the city as a planning commissioner, Downtown Development Authority Board, and numerous other committees.

Davis spent four years in the U.S. Air Force and served as a volunteer firefighter and EMT in New York and New Jersey. He also majored in physics at Wagner College in New York City.

“I feel that my training, my work ethic and management experience have all been helpful to the city,” Davis said. “I’ve enjoyed the opportunity to work toward helping this city. I take this responsibility very seriously, and I wish to have this honor for one more term.”

Joe DeLuca is proud of his 32 years of dedicated service to the Imlay City Police Department. “I have served my community honorably and faithfully as both a police officer and School Resource Officer. I am now looking to continue being a public servant as your next ciy commissioner.”

“I bring a vast background of the inner workings of our city government,” DeLuca says, “I believe in keeping local control, including funding, of all city departments.

“I was on the front lines with organizing and supporting our Imlay City Police Department from the city commissioners who were looking to dissolve and defund our local police in April 2021.”

After his retirement from the ICPD in 2021, DeLuca now serves as the Dean of Students at the Imlay City Middle School and continues to be very active in the community.

“I have always had an open-door policy with our community members,” says DeLuca.

“I promise if elected, our citizens’ voices will be heard, valued and acknowledged. If you vote for me, you have the assurance that I will work tirelessly for our community and the citizens of Imlay City.”

Phil Fulks has dedicated 32 years to fighting corruption in government as an attorney. If elected to the commission, Fulks intends to dedicate himself to representing what he believes is best for his fellow residents.

“In the past year, I’ve seen our city government fail in its leadership. I’ve seen our commission attempt to eliminate our police department in favor of contracting with the Sheriff’s Department.

“I’ve seen our citizens rise up and speak out loudly in opposition to that effort,” Fulks continued. I’m hearing of new directives to not allow our police officers to communicate with Imlay City citizens, unless it involves legal matters.

“If elected, I will work to restore the lines of communication between our residents and police officers. That is a relationship that has worked well in the past.”

Al Ramirez is a lifelong resident of Imlay City, whose commitment to the community has run the gamut. Ramirez was employed for more than 35 years as a production supervisor at Pinnacle Foods, LLC (Vlasic Foods).

His community service includes having served on the Board of Directors of the Lapeer County United Way and Lapeer County Board of the Big Brothers/Big Sisters.

Additionally, he spent 13 years as the Director of Imlay City’s Brotherhood Boxing Organization, and was instrumental in founding Imlay City’s Women’s Softball League.

As a lifelong resident, Ramirez has seen Imlay City grow from a rural farm community to one that is primarily industrial and residential based.

“As the city grows, we have to adjust to the demands that growth brings with it,” Ramirez said. “We need to do what we can to support new industry to provide jobs and opportunities for residents.

“Though change is constant,” he said, “the city commission must also work to ensure that we in ways are consistent with our small-town values and interests.

“We must make sure that we continue to provide essential services to our residents,” Ramirez continued. “As a commissioner, I will support our police, fire, DPW, and wastewater treatment facility employees.

“I also believe in promoting from within and to retain our loyal employees,” Ramirez said. “I can be counted on to vote for what I believe is in the city’s best interests.”

Jonathan Roy is a lifelong Imlay City resident and business owner who says he has a vested interest in seeing Imlay City thrive and grow.

A 1992 ICHS graduate, Roy has a business degree from Central Michigan University. As a parent of a Borland Elementary third grader, he believes in a grass roots education that provides students with the tools to succeed.

“If elected, I will represent my neighbors and fellow residents and be your conservative vote in order to combat rising taxes and utility fees,” Roy said. “It will be my honor to represent you with the utmost integrity and devotion.”

Barb Yockey has been a practicing attorney for 39 years, having degrees in business administration and Doctor of Jurisprudence from West Virginia University. She operates her own business, Barbara L. Yockey Law Office, PLLC, in downtown Imlay City.

“I have attended virtually all city commission meetings for the past 17 months, so I am well versed regarding city issues and would be ready to hit the ground running if elected,” Yockey said.

She added that the city currently needs grant funding to to be able to handle major infrastructure needs, including rebuilding Fourth Street and the sewer system along M-53. “We also need assistance with funding to help buy new fire trucks, which are getting old and need to be replaced.”