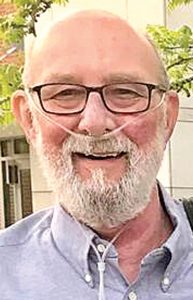 Frank Richard “Dick” Bridenbaugh passed away on September 22, 2022 at his home in Auburn, MI after a long illness. He was 76 years old. Frank was a caring husband, father, brother and friend. His bright smile will be missed by all who knew him. Frank was born on March 4, 1946 in Detroit, MI to the late Frank V. and Edna F. (Baxter) Bridenbaugh and grew up in Attica with his mother, Edna, and stepfather, Robert “Bob” Kempf. After graduating high school in Imlay City, Frank served in the U.S. Marine Corps from 1967-1969 serving two tours in Vietnam. Frank spent his career working for Consumers Energy, retiring in 2003 after 34 years of service. Frank was a proud member of the American Legion for 53 years.

Frank will be remembered by his unwavering generosity, endless patience, and his ability to fix anything. He had a giant heart and loved spending time with family and friends. He was the most amazing father to his three children, and father-figure and grandfather-plus to so many more.

A graveside service will be held at 1 p.m. on Saturday, October 22, 2022 at Imlay Township Cemetery, Imlay City, MI. In lieu of flowers, the family suggests that donations be made in Frank’s honor to The American Legion Post 135, 212 E. 3rd St., Imlay City MI 48444 or Wreath’s Across America. Military honors will be conducted under the auspices of the United States Marine Corp, Imlay City American Legion Post 135 and V. F. W. Post 2429.