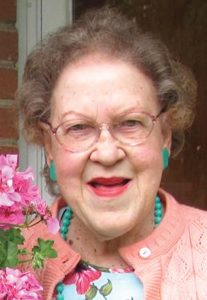 Elsie Seidell, 90, died peacefully with her family by her side on Thursday, October 13, 2022, at The Cottages of Davison. Elsie Mae Sterner was born to Charles and Lillian Sterner on July 23, 1932, in Dryden, MI. Elsie married her high school sweetheart, Robert A. Seidell, on June 7, 1953, in Capac, MI. Elsie and Bob were married for 65 years and were long-time residents of Imlay City, living in the same house they raised their family in, until his passing in 2018.

After Bob’s death, Elsie moved to Davison where she was lovingly cared for at Charter Senior Living Center until July 2022. She especially loved Jaimie, Aaron, Joy, Cara, Lisa and Jenny. Elsie received her final days of care at The Cottages of Davison where she shared her many stories with the kind and caring staff. Special thanks to Melissa Taylor and her staff at The Cottages as well as Ted from Absolute Home Health and Hospice, for their compassionate care.

Elsie began her career at Chrysler working as a Comptometer from 1951-1954, while living at the YWCA as Bob was stationed overseas during the Korean War. Her career continued at Imlay City Schools in 1966 where she worked as a teacher’s aide, clerk typist, and secretary. She finished her career working for 11 years as the secretary to Larry Freeland, principal at Borland Road School, where she retired in 1989.

Elsie enjoyed helping others and was a member of the AFSCME Local #1421. There she served several years as secretary for the Imlay City chapter as well as for the Executive Board. Elsie and Bob were active members of St. Paul’s Lutheran Church in Imlay City.

She was preceded in death by her husband, Bob; her son, Dale; her parents; and siblings, Ken Sterner, Helen (baby), Arlene Weingartz and Carl Sterner.

The family will receive visitors at Muir Brothers Funeral Home on Wednesday, October 19 from 2-5 p.m. and from 6-8 p.m. Funeral services will be held on Thursday, October 20 at 11 a.m. at St. Paul’s Lutheran Church, 200 N Cedar Street, Imlay City with a visitation period from 10-11 a.m. Officiating is Reverend Alan Casillas, pastor of St. Paul’s Lutheran Church of Imlay City. Interment will follow at Imlay Township Cemetery. Please be sure to sign the online register book at www.muirbrothersfh.com to share your memories and condolences with the Seidell family. Those wishing to make memorial contributions may direct them to The Cottage of Davison or to Absolute Home Health & Hospice, Grand Blanc, MI.