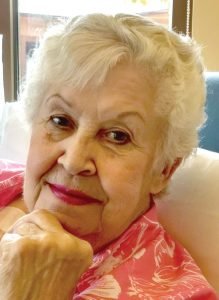 Doris Judie Fowler, age 81, passed away peacefully with her daughter Carmen and son-in-law Michael by her side on Wednesday, October 12, 2022. Doris Judie McSpadin Fowler was born March 24, 1941 in Standish, MI. She was the daughter of the late Frank and Viola McSpadin. She was preceded in death by three brothers and one sister. Doris grew up on a farm in Standish, MI and was a 1959 graduate of Arenac Eastern High School. She married Paul Welch September 6, 1959 in Standish MI. She was preceded in death by Paul Welch October 11, 2022.

Doris went by her middle name “Judie” because she didn’t like her first name, that’s how everyone knew her. Judie had four children, two boys and two girls, and was a homemaker while raising her children. When her children were grown Judie became an owner operator with North American Van Lines for 10 years and then for Aries Expediting Services until she retired at age 62.

She moved to Imlay City in 2002 to Cambridge Court Apartments where she resided for 20 years and had many friends. Judie loved to go shopping, put puzzles together and also loved redecorating her apartment and helping her daughter redecorate her house. She also loved tending to her flowers on her patio every summer. Judie loved cats; she had three of her own and was always feeding and helping any stray cats that needed help.

She was preceded in death by one grandson (Christopher); and an infant son (Travis). Judie wishes were to be cremated and have no memorial service.

Please be sure to sign the online register at www.muirbrothersfh.com to share condolences and memories with the Fowler family.