“We had a bit of a slow start but we were able to find our footing,” Almont Coach James Leusby commented. “Yale is big and physical so it was a challenge to match their physicality but our guys got the job done.” 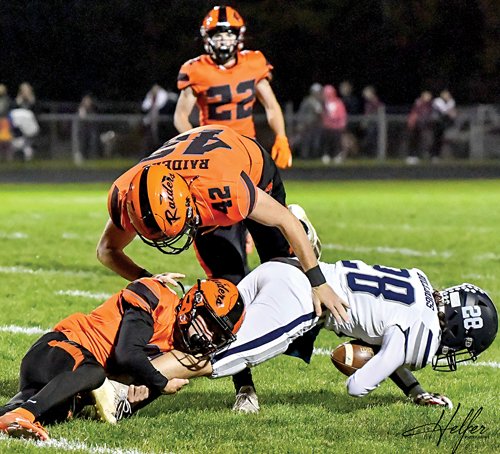 “This was a good win that will help position us for the postseason.”

In Friday’s contest, Almont took a 7-0 advantage after one quarter was over with.

Almont followed it up with a 7-0 second quarter edge and a 7-0 third quarter advantage, increasing their cushion to 21-0.

Both sides then struck for 14 points the rest of the way, leaving Almont up 35-14 at night’s end.

For the evening, Kruse completed three of seven pass plays for 75 yards as Almont’s quarterback. He threw zero interceptions along the way.

His successful tosses went to two different targets. Their ranks consisted of Walton (two catches for 66 yards) and Connor Nascivera (one reception for nine yards).

The Almont ground attack chewed up 374 yards of territory on 42 totes.

Measel (an interception) added the lone Almont takeaway that evening.

Almont closes out their regular season this Friday with a road trip to Goodrich. That matchup lists a 7 p.m. starting time.