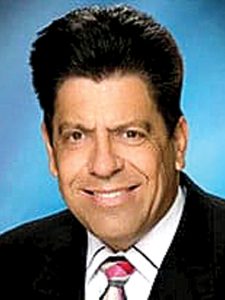 Walter William Frederiksen passed away on September 24, 2022, He was 63 years old.

Walt was born in Detroit, MI. He grew up in Inkster before moving to Dryden and graduating Almont High School with the class of 1977. He met the love of his life, Jacqueline, in college. They graduated from Oakland University together.

Even as a young boy, Walt had a passion for acting and music that inspired his early radio career. He began working at WRIF as a college intern. Walt’s massive charisma and talent quickly resulted in him becoming an on-air weekend personality.

Walt’s passion for entertainment led him to achieve an extensive career in advertising. He dedicated almost 30 years to his Little Caesars family, where he was a beloved, valued team member and dear friend. As a Senior Director of Advertising, he became known as “the voice behind Little Caesars.” He was revered as an extraordinary storyteller who loved to make people laugh. He felt incredibly privileged to have worked on many radio, print, and national television ads over his long career, but was especially proud of the meaningful relationships that transcended the work, building friendships that deeply enriched his life.

Those who knew Walt understood his deep knowledge and love of music. His appreciation spanned many genres, as well as collecting and playing guitars. He was a frequent concert attendee and entertainment aficionado. His energetic spirit translated into the love and care he poured into his family. He spent most Sundays golfing with his father and two sons. His selfless nature ensured that being the most loving father, brother, husband and son always remained his most impressive talent of all. He never hesitated to share abundant love and kindness, and he left a lasting impact on everyone he met. Despite many years battling chronic illness, Walt always persevered with unmatched optimism, humor and drive. It never defined him or slowed him down. He will forever be cherished for his deep love and devotion toward his family and friends.

A Celebration of Life open house will be held on Sunday, October 23 from 1-5 p.m. The celebration will be held at the VFW Banquet Hall, 35011 23 Mile Road in New Baltimore.