“It was a great homecoming night for our team and the whole community,” Almont Coach James Leusby commented. “We took another step forward this week behind our senior leadership,” he noted. 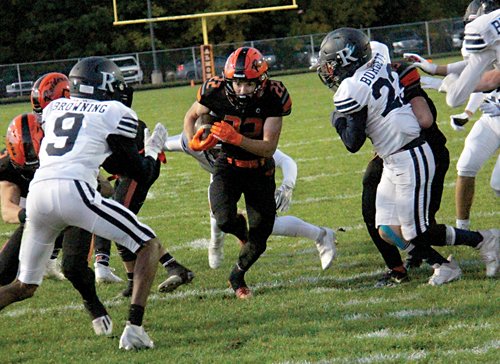 Matthew Measel, of Almont, heads to the endzone for a touchdown during his team’s homecoming win Friday against Richmond.

“The defense was locked in and pitched a shutout to give our offense good field position all game. It was a total team effort.”

In Friday’s encounter, Almont grabbed an 8-0 edge after one quarter was complete.

Almont followed it up with a 16-0 second quarter advantage, widening the gap to 24-0 at the halftime break.

When play resumed, Almont picked up where it left off. Aided by a 20-0 third quarter edge, the Raiders went up by a 44-0 count.

That was followed by a scoreless fourth quarter, leaving Almont triumphant at night’s end.

For the night, Trenton Kruse completed two of seven pass plays for 56 yards as Almont’s quarterback. He threw zero interceptions along the way.

His successful tosses went to two different targets. Their ranks consisted of Cole Walton (one catch for 38 yards) and Connor Nascivera (one reception for 18 yards).

Almont returns to action this Friday when it entertains Blue Water Area Conference counterpart Yale. That battle begins at 7 p.m.