Almont nets fourth in a regional 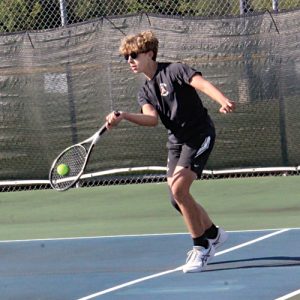 Owen Viane, of Almont, returns a shot during a match earlier this season.

Those three schools continue their respective postseason paths this Friday and Saturday at the Division 4 state finals in Kalamazoo.

Six other teams battled it out for regional honors. Their ranks consisted of Almont (11 points), Yale and Clawson (four each), Imlay City and Marine City (three apiece) along with Richmond (one).

Nolan Roszczewski (third singles) added one point to Almont’s cause.