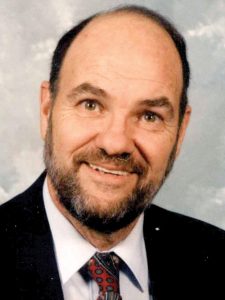 Michael Barber, age 81, of Metamora, MI died Friday, September 30, 2022 at his home in Metamora. Michael Harold Barber was born March 25, 1941 in Berkley, MI. He was the son of the late Harold and the late Emma (Gauthier) Barber. As a young boy, when school was out during the summers, he would live up-north on his Grandma’s farm; helping his uncles on the farm in Manistique, MI. There he learned to drive all the tractors even before he could touch the pedals.

For a few years he studied in Missouri, attending a seminary; he returned to graduate from Shrine High School, Royal Oak, MI. Michael served in the U.S. Army for six years during the Vietnam War. He married Brenda Baumstark Marttila on March 5, 1993 in Almont, MI.

Michael worked as a sales engineer in robotic engineering for Fanuc of Oakland County, Staubli of France, and he retired for a 3rd time from Applied Manufacturing of Oakland Co. He was a devoted husband and ‘PAPA’ and loved his children and grandchildren. He loved his LORD and it brought him great pleasure sharing with friends about his faith. He enjoyed playing golf; he was very athletically talented and he seemed to be able to fix almost anything.

Michael was preceded in death by his first wife, Ruth Barber; son, Douglas Barber; and his parents, Harold and Emma Barber.

A graveside service will be held on a later date at Great Lakes National Cemetery, 4200 Belford Rd., Holly, MI.

The family will be available for visitation from 10-11 a.m. Wednesday, October 5 at Crossroads Baptist Church.

Those wishing to make memorial contributions may direct them to the Barber family.

Please be sure to sign the online register book at www.muirbrothersfh.com to share your memories and condolences with the Barber family.