IMLAY CITY — Since August, when it became known that a ballot proposal to legalize medical marijuana sales would appear on the November ballot in the city of Imlay City, many have wondered who is behind the effort.

With just over a month to go before election day, that question still remains mostly unanswered. 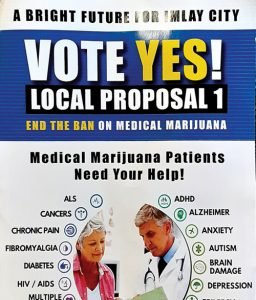 A flyer sent to Imlay City residents was paid for by a group called “Jobs for Michigan” which listed a residential mailing address in Lansing.

The return address listed on a flyer sent to Imlay City residents encouraging them to vote in favor of the proposal can be traced to a UPS store in Livonia which also serves as the same address for Oakland Cares, a ballot question committee, which was formed in Oakland County in June 2021. The treasurer of that group, Jonathen Tebbutt, did not respond to a phone message from the Tri-City Times.

Another mailer encouraging a “yes” vote lists “Jobs for Michigan” as the entity that paid for its distribution. The Lansing address associated with it is a residential property—a 1912 home with five bedrooms and two bathrooms that’s currently for sale.

According to reporting from Lansing public radio station WKAR’s Sarah Lehr, the funding and proponents of similar ballot proposals in past Michigan elections have been unclear. What is known indicates those past requests could have some ties to the Imlay City ballot question.

According to their reporting, Tebbutt was listed as the treasurer for other coalition groups in places where similar measures were on the Nov. 2021 ballot like Shiawassee and Eaton counties.

They note that proposals in other towns were also promoted by mailer or fliers with similar names like “Jobs for Rockwood” and “Jobs for Clawson.”

The “Jobs for Michigan” mailer claims that passage of the proposal would “raise hundreds of thousands of dollars in new tax revenue and licensing fees” and “redevelop blighted, abandoned and vacant property in Imlay City.”