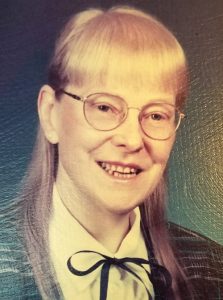 Kay L. Stoller, 75, lifelong resident of Almont, passed away Wednesday, September 28, 2022 at McLaren Lapeer Region Hospital. She was born May 13, 1947 in Almont, the daughter of George and Eva (Krueger) Bowman. She graduated from Almont High School in 1965. Kay married Mark Stoller on September 29, 2001 in Almont. She had worked at Hamills Mfg., North Hill and Alco Plastics and was a member of Grace Fellowship Church in Dryden.
Kay enjoyed her cockatiels and cats, attending church and singing along with vacationing in Mackinac City.

She was preceded in death by her parents.

Visitation will be Thursday, October 6, 2022 from 11 a.m. to 2 p.m. with the funeral service at 2 p.m. at Muir Brothers Funeral Home in Almont. Burial will follow at Ferguson Cemetery.