IMLAY CITY — The Imlay City City varsity football team wound up on the losing side of a 42-13 decision to Yale in its homecoming game last Friday night.

“The team battled all night,” Imlay City Coach Dave Brown commented. “The first half Yale did a great job defensively giving us various pressure fronts that took us awhile to adjust to and caused big plays (two interception returns for touchdowns),” he noted.

“We went into halftime saying we needed to put that behind us and just go out and win the second half. Our coaches and players really have adopted a compete at everything we do until the end mentality. We took that mindset into the second half and started to execute more consistently on both sides of the ball. This team of young men are amazing and have no quit. With the effort they put in daily they we will continue to improve and compete.” 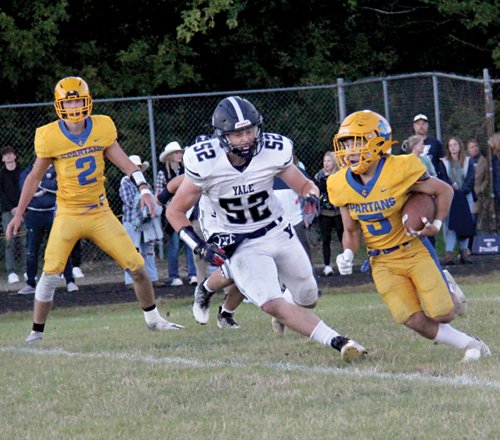 In Friday’s game, Imlay City spotted Yale a 14-0 advantage after one quarter was over with.

Quarter number two saw Yale accumulate 28 points and Imlay City manage none. That made it 42-0 Yale at the half.

Imlay City then bounced back with a 7-0 third quarter edge, closing their deficit to 42-7 with 36 minutes gone.

Quarter four would see Imlay City generate six points and Yale finish with none. That left Yale with a 42-13 win to celebrate at night’s end.

For the evening, Vanderploeg completed three of 16 pass plays for 104 yards as Imlay City’s quarterback. He threw two interceptions along the way.

His successful tosses were distributed to two different targets. Their ranks consisted of Rojas (two catches for 88 yards) and Danny Newsom (one reception for 16 yards).

The Imlay City rushing attack wound up with 79 yards on 20 totes.

The Imlay City defense also registered a pair of takeaways. Mitchell Lemier (a fumble recovery) and Travis Dupont (an interception) furnished that.

Imlay City will look to bounce back this Friday when it travels to Cros-Lex for a Blue Water Area Conference matchup. That contest begins at 7 p.m.