CAPAC — Capac gave host Farwell all it could handle and then some, only to drop a 46-40 verdict in an 8-Man football battle last Friday night.

With the decision, Farwell improves to 6-0. Capac slips to 2-4 this season. 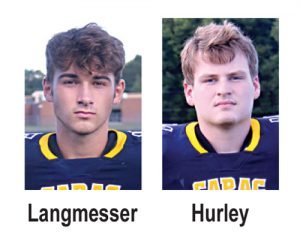 “Our kids gave it everything they had,” Capac Coach Rob Novy said. “We had our chances but just did not make enough plays,” he noted.

In Friday’s battle, Farwell grabbed an 8-0 edge after one quarter was done.
Capac then bounced back with a 22-16 second quarter advantage, closing the gap to 24-22 at the half.

When the action resumed, Farwell struck with a 14-6 third quarter edge. That staked them to a 38-28 advantage with 36 minutes gone.

Quarter number four would see Capac outscore Farwell 12-8, only to drop a 46-40 verdict.

For the evening, Uribe-Arce completed seven of 17 pass plays for 143 yards as Capac’s quarterback. He threw one interception along the way.

Langmesser was the other Capac player who opted to air out the football. His lone attempt went for a seven-yard completion.

Those successful tosses went to three different targets. Their ranks consisted of Langmesser (five catches for 59 yards), Hurley (two receptions for 61 yards) and Phillips (one catch for 30 yards).

The Capac ground attack chewed up 211 yards on 39 totes.

The Capac defense also registered a pair of takeaways. Langmesser and Kramer (a fumble recovery each) furnished those.

Capac will look to bounce back this Friday when it plays at Kingston. The North Central Thumb League Stars Division clash is slated to get underway at 7 p.m.