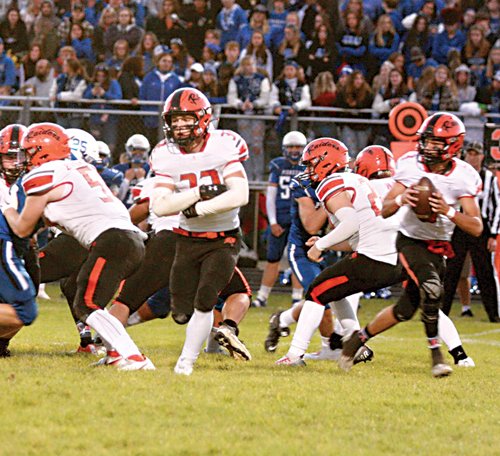 Almont’s Trenton Kruse drops back to pass during his team’s game with Cros-Lex last Friday.

“This was a great win for us after two tough weeks,” Almont Coach James Leusby observed. “Our kids played extremely hard and left nothing out on the field,” he noted.

“Our defense was able to click and shut them down in the second half and our offense was able to make some big plays in the fourth quarter. This is a huge step in the right direction for us. As always, thanks to our community and students that made the one hour trip and helped us to a big win.”

In Friday’s meeting, Almont grabbed an 8-7 edge after one quarter was complete.

Cros-Lex then bounced back with a 19-16 second quarter advantage, going ahead 26-24 at the half.

For the evening, Kruse completed nine of 17 pass plays for 144 yards as Almont’s quarterback. He threw zero interceptions along the way.

Walton was the other Almont player who opted to air out the football. His lone attempt went for a 29-yard completion.

The Almont defense also wound up with three takeaways. Lucas Mantini, Cody Koval and Battani (a fumble recovery each) notched those.