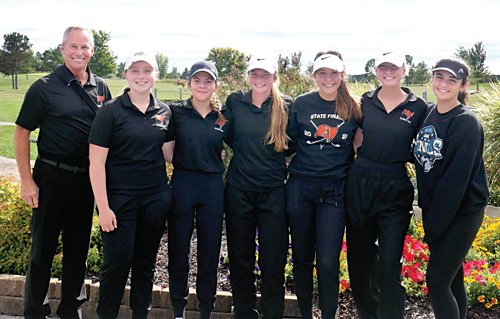 The Almont girls’ golf team poses for a photo after winning the BWAC title. Three days later, Almont qualified for states by placing third at their regional. Photo by calli@thesportsreportmi.com

ALMONT — The Almont girls’ golf team continues to add to their growing list of accomplishments, qualifying for the state finals and winning a Blue Water Area Conference title this past week.

Almont closed out that successful stretch Monday, claiming a third-place finish at a Division 4 regional.

Washtenaw Golf Club, in Ypsilanti, is where the action unfolded.

With the outcome, Almont advances to the Division 4 state finals set for October 14-15. That event will be contested at The Meadows Golf Course in Allendale.

Jesse Kautz shot a 90 and Olivia Kotelnicki posted a 94 to lead Almont that day. The Raiders also counted Autumn Bletch’s 111 and Bella Moussiaux’s 115.

Imlay City also participated, but did not field a complete squad.

Kautz’s tournament-low round of 86 over 18 holes led Almont that day. Kotelnicki claimed second medalist honors, thanks to a 98.

Lakynn Alessandrini and Alexa Lengemann paced Imlay City with 125s. They were backed by Summer Belleville (145).

With the tournament showing, the Almont girls’ golf team clinched the BWAC title. The Raiders swept all the regular season matches as well.