ALMONT — Almont wound up on the losing side of a 34-14 outcome versus visiting North Branch in a Blue Water Area Conference varsity football battle last Friday night.

“All credit goes to North Branch tonight,” Almont Coach James Leusby commented. “That is a big and physical football team and they earned it out on the the field,” he noted. 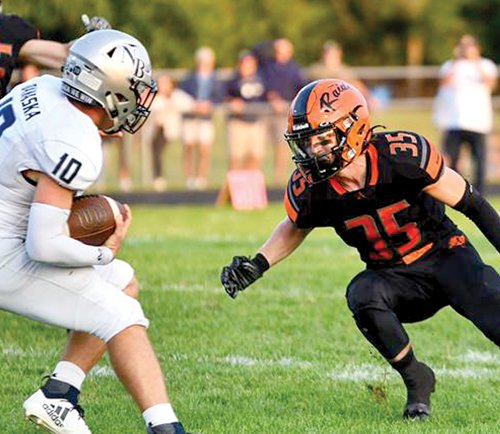 Almont’s Jacob Fulller closes in for a tackle Friday versus North Branch.

“We had our opportunities but North Branch controlled the clock and that was the difference.”

In Friday’s battle, Almont and North Branch ended the initial quarter with zero points each.

When the action resumed, Almont struck with a 7-6 third quarter edge. That trimmed their deficit to 18-7 with 36 minutes gone.

North Branch then outscored Almont 16-7 the rest of the way, finishing off a 34-14 win.

For the night, Kruse completed six of 12 pass plays for 67 yards as Almont’s quarterback. He threw one interception along the way.

His successful tosses went to three different targets. Their ranks consisted of Measel (three catches for 49 yards), Ferman (two receptions for 11 yards) and Chase Battani (one catch for seven yards).

Almont will look to bounce back this Friday when it travels to Armada for a Blue Water Area Conference clash. That contest is slated to get underway at 7 p.m.