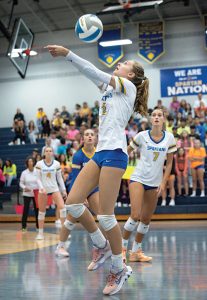 Imlay City’s Makayla Bruman returns a shot during a recent match at home.

They then received a bye to the semifinal round. It was there they bowed out with a 23-25, 14-25 setback to Cass City.

Keeping and Makayla Bruman shared the playmaking responsibilities for Imlay City. They managed 42 and 26 assists, respectively.