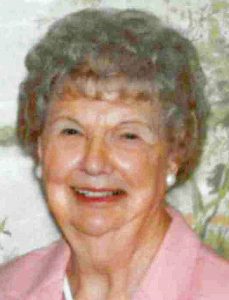 She was born July 14, 1926, in Imlay City, daughter of the late Jay and Bernadette (Gitra) Donovan. Bette graduated from Imlay City High School in 1943 and then went on to Lapeer County Normal in 1944 and then to Eastern Michigan University in Ypsilanti. She taught in a one room school in the Imlay City community for several years. She finished her career in the Math Lab at the Bea McDonald School after 20 years of service.

She married Robert C. Ingram, June 12, 1948, at the Sacred Heart Catholic Church in Imlay City. They were married 67 years until his death on June 20, 2015. During that time, they enjoyed many trips through the United States.

She was preceded in death by her son Robert, who died in 2018; siblings, Robert Donovan, Pat (Rosemary) Donovan and Dick (Marie) Donovan.

The family would like to thank the United Hospice Services for their caring and compassion during this difficult time.

The family would also like to thank her wonderful neighbors, Michelle and Don Woodworth; and her special care giver and friend, Ginny Dye. Special thanks to Sharon Klawender for her visits and care.

In lieu of flowers, please consider donating to the United Hospice Service or the Holy Family (St. Elizabeth) Church.