CAPAC — At their Monday night meeting, the village council voted unanimously to approve a tax abatement for Axiom Engineered Systems, the soon-to-be occupants of the former Keihin Michigan Manufacturing plant on Koehn Rd.

The terms of the agreement are for the company to create 98 jobs and make more than $1.8 million in investments in the facility within a 24 month period and, in exchange, Axiom will receive a 12 year, 50 percent tax abatement. 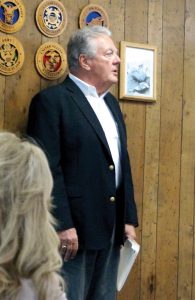 Axiom’s Larry Watkins addresses the Capac Village Council during a public hearing for a tax abatement.

“We plan to be there for a very long time,” Axiom representative Larry Watkins told village officials during a public hearing.

The Ontario, Canada-based company makes injection molded parts for automakers including battery trays. Ninety percent of what they currently manufacture goes to assembly plants in the U.S. with Stellantis being one of their biggest customers. They also work with Volkswagen, Tesla and Rivian. Approximately three years ago the company decided they wanted to open a manufacturing facility in the U.S. Currently they have two facilities in Ontario and one in Mexico.

Watkins said they’ll begin by using the Capac plant to warehouse parts starting in early 2023 before actual manufacturing begins. In November, some of the ten presses they plan to install will start arriving at the facility. Currently they are making preparations for two cranes to be placed within the plant.

“Forty million dollars worth of business will be moving to Capac,” Watkins noted.

He said Axiom’s first two hires were former Keihin associates who are helping them make preparations. Hiring for actual production staff won’t take place until the first of the year and Watkins said the process will be slow at first. Their intention is to have 200 employees within a couple of years’ time with the majority of those positions being press operators.

“Finding help or resources has been tough lately but we feel this area is very compatible to our needs. We think we can find the talent we need,” Watkins said, noting that they intend to staff three shifts over a five day work week.

The automotive supplier was founded in 1987 and has grown from a worth of $10 million to $100 million.