IMLAY CITY — Another Woods-N-Water News Outdoor Weekend is in the books. Sizeable crowds turned out for the three day event at the Eastern Michigan State Fairgrounds.

Joined by their children Aurora, 4, and Andalyn, 4 months, Darren said the event lived up to its reputation.

“I like to hunt deer and I’ve been bear hunting,” Darren said.

“More recently I’ve got into fishing, so this event has all of that.”

Avoca residents Jayne and Dave Force brought along their 4-year-old son, Robert, with the intent of teaching him the importance of being outdoors.

“I’ve been coming to this show on and off for at least 20 years,” Dave said.

“I’ve always liked being outdoors and we wanted to share that experience with Robert.”

Also enjoying the event for the first time were the Hunger sisters—Autumn and Paige, 16, and Chloe, 19, of Almont. 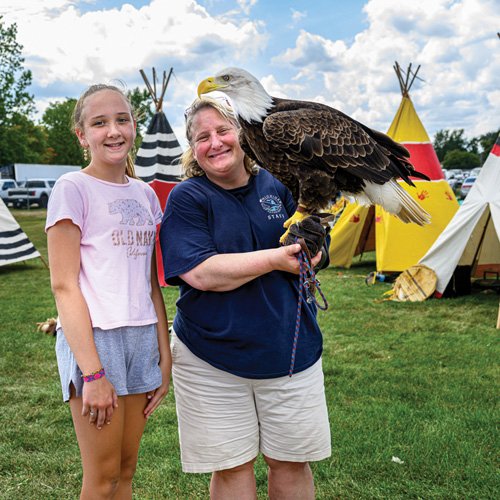 Anna Bachmann, 12, of Rochester gets to meet a Bald Eagle, courtesy of Michigan Avian Experience.

Chloe said she particularly enjoyed a program presented by Native American Indian Reg Pettibone, who danced and shared some of his personal stories with the attentive audience.

“I’ve always been interested in our Native Americans,” Chloe said.

“I admire the respect and appreciation they have for the environment and for all living things. I liked his message that we should only take what we really need in life, and leave the rest for others.”

Michigan Hawking Club member Greg Barnes of Otter Lake proudly displayed his three-year-old red tailed hawk, Stella, on Saturday. Guests had the chance to see Stella and a variety of other big birds up close and personal thanks to the club.

“Many people don’t know that hawking is a highly-regulated sport and she actually belongs to the state,” Barnes said, noting that he must also follow requirements from the federal government as well to care for and work with the hawk.

In addition to all the sights and sounds, there was lots of good food and drinks to enjoy
too.

On Saturday, showgoers sampled chili served up by competitors in the Camp Chili Cook-Off with many contenders scraping their pots clean before trophies were handed out.