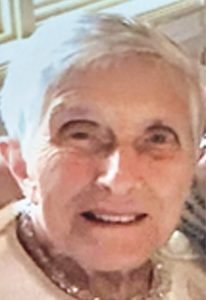 Jo grew up in Detroit, attending Assumption Grotto Grade School, graduating in 1943 from Nativity High School where she excelled not only in her classes, but also as a basketball player.

Jo continued to play basketball throughout her early years of marriage for Detroit’s CYO league. As team captain, she led her girls to a City Championship in 1946. Her love for the sport continued for 30 years, first coaching at St. Peter Grade School in Harper Woods, MI as well as a CYO basketball referee and umpire for girls’ softball. Her enthusiasm, energy and love for sports inspired many young girls.

Jo was a longtime resident of Florida, volunteering in community programs until her final months. She was well loved for her great laugh and quick wit. She never missed a chance to play euchre or Texas hold ’em with her friends.

Jo was preceded in death by her husband, John; and her son, Stephen.

Jo will be dearly missed by all who loved her.

A funeral mass will be held at St. Cornelius Catholic Church in Dryden, MI on Thursday, September 22 at 11 a.m. She will join her husband John September 23, at Great Lakes National
Cemetery.