TRI-CITY AREA — Almont jumped out to 35-0 halftime advantage and went on from there to register a 42-17 triumph against host Imlay City in a Blue Water Area Conference varsity football encounter last Friday night.

“We had a solid first half tonight and took some steps forward again this week,” Almont Coach James Leusby said. “Our young guys got an opportunity to play tonight which will pay dividends down the road,” he noted.

“We have a long road ahead of us to reach our goals so we will get back to work.”

In Friday’s encounter, Almont took a 7-0 edge after one quarter was over with.

They then followed it up with a 28-0 second quarter advantage, increasing their cushion to 35-0 at the half. 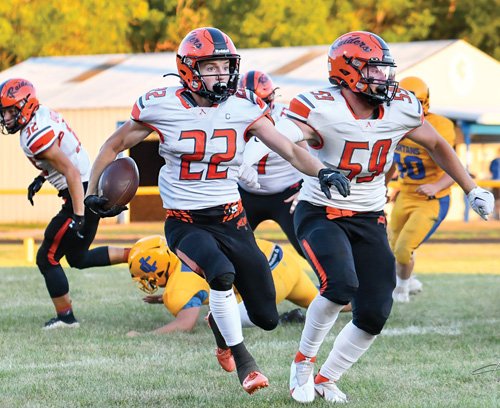 Kruse (two for six for 49 yards and Caydon Nascivera (one for one for 20 yards) shared the quarterback responsibilities for Almont.

Walton (two catches for 49 yards) and Luke Winkler (one reception for 20 yards) hauled in their successful tosses.

Imlay City also connected on one of three other pass plays for eight yards.

Almont returns to action this Friday when it entertains North Branch, while Imlay City looks to bounce back with an away game versus Armada. Both BWAC contests list 7 p.m. starting times.