That news came from the authority on Tuesday morning. Over the Labor Day holiday weekend, crews were able to install the final sections of new pipe at the site of the August 13 break in St. Clair County. Also, since then, the Lake Huron Water Treatment Plant began producing water to start refilling the water main. GLWA officials say 81 million gallons of water is needed to fill the 26 mile-long main as it travels from the treatment plant west to GLWA’s pumping station in Imlay Township.

The authority said they are working with state environment officials to implement a flushing and disinfection plan for the main. 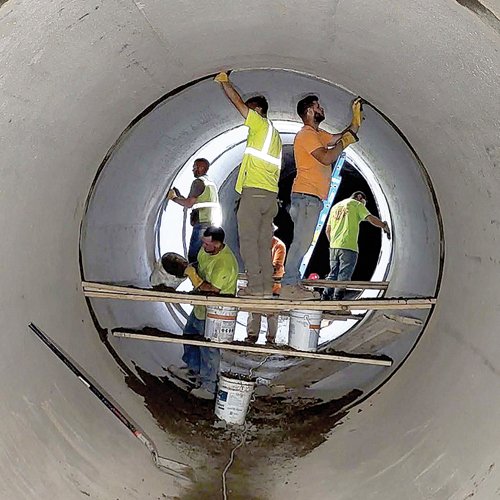 Now that the new water main has been installed, GLWA said it will take approximately two weeks to fill, flush and disinfect the system that serves Imlay City and Almont.

“I want to thank everyone for their patience and understanding as we work through this very difficult situation. I also want to thank out member partner communities, our partners in the Emergency Management community and all our water utility workers both in GLWA and the municipalities who are on the ground operating their systems during this emergency,” Suzanne Coffey, Chief Executive Officer of GLWA, said last week.

A boil water advisory for Imlay City, Almont and other communities was issued on August 13, the day the main break was discovered. That advisory was lifted one week later on August 20. Late on Tuesday, August 30, the Lapeer County Health Department reported that elevated levels of lead had been found in some Imlay City homes and, in response, bottled water and water filters were made available to residents on Wednesday and Thursday at the Eastern Michigan State Fairgrounds. The filters were provided by the Michigan Department of Health and Human Services and the Department of Environment, Great Lakes and Energy.

City Manager Craig Horton said that demand for the filters was strong on Wednesday and a smaller but steady line of residents attended Thursday’s distribution event. Residents could request either a faucet or pitcher filter.

According to Police Chief Brett Selby the city’s most recent tests revealed low levels of lead in the water of 14 of the 22 homes that were tested.

Following the discovery of low levels of lead, the health department advised that all residents—especially those with children and pregnant persons—should use filtered or bottled water for drinking, cooking, brushing teeth and making infant formula. Lead has been found to be harmful in both children and adults.

“Tap water can continue to be used for handwashing, bathing and showering and laundry by all households,” the health department stated.

Meanwhile, the city continues to test for lead content in the city’s water supply and residents can contact the city offices to request in-home testing, Selby said.

Imlay City residents who weren’t able to attend last week’s distribution events may contact the city offices at 810-724-2135 to request a filter or inquire about bottled water.

On behalf of the city of Imlay City, Selby thanked the Eastern Michigan State Fair, it’s board and director Ian Kempf for allowing use of their facilities for multiple water and filter distribution events.