CAPAC — Capac gave fifth-ranked Deckerville all they could handle for all but a few minutes of the contest, only to drop a 40-28 verdict to visiting Deckerville in a North Central Thumb League Stars Division varsity football 8-Man football battle last Wednesday night.

“Our kids stood toe to toe with the fifth-ranked team in the state into the fourth quarter,” Capac Coach Rob Novy observed. “We made some mistakes in the second half and it cost us,” he noted.

“We have to learn how to handle adversity and fight through the bad breaks. Congrats to Deckerville on a well earned victory. We got some great play from Derek Mason, Adam Kramer, James Meadows, Matt Lee, Aden Uribe-Arce and Blake Phillips. Our quarterback Carlos Uribe-Arce showed great leadership and made plays all night.”

In Wednesday’s battle, Capac and Deckerville ended the initial quarter with eight points each. 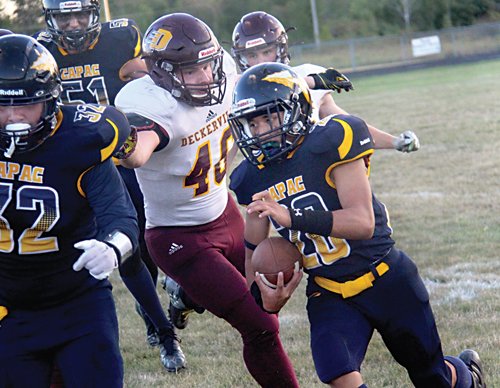 Matt Lee, of Capac, carries the ball during a contest last Wednesday with Deckerville.

Quarter two saw Capac generate eight points and Deckerville none, putting them up 16-8 at the half.

When the action resumed, Deckerville bounced back with a 14-6 third quarter edge. That made it 22-22 with 36 minutes gone.

Deckerville then outscored Capac 18-6 from that point on to pull out a 40-28 victory.

For the night, Carlos Uribe-Arce completed four of 10 pass plays for 66 yards as Capac’s quarterback.

Capac will look to bounce back this Friday when it hosts Atherton. The contest, Capac’s homecoming game, begins at 7 p.m.