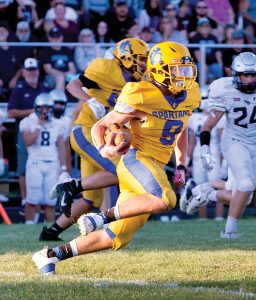 Andrew Cezik, of Imlay City, heads up the field on the way to a touchdown last Thursday.

IMLAY CITY — Imlay City wound up on the losing side of a 60-7 outcome to visiting North Branch in a Blue Water Area Conference varsity football game last Thursday night.

In Thursday’s game, Imlay City spotted North Branch a 24-0 advantage after one quarter was done.

North Branch followed it up with a 30-0 second quarter edge, widening the gap to 54-0 at the half.

When play resumed, North Branch picked up where it left off. Aided by a 6-0 third quarter advantage, the Broncos went up 60-0 with 36 minutes elapsed.

Imlay City then outscored North Branch 7-0 from that point on, resulting in a 60-7 defeat.

Brady VanderPloeg drew the quarterback assignment for Imlay City that evening. He connected on three of eight pass plays for 40 yards.