ALMONT — Almont bolted out to a 41-0 halftime cushion and never looked back en route to a convincing 44-0 victory over Hamtramck in a non-league varsity football confrontation last Thursday night.

With the final, Almont improves its mark to 2-0 this season.

“It was a good night to get a lot of reps for our younger players,” Almont Coach James Leusby said. “They were able to get some much-needed experience and that will help us down the road,” he noted. 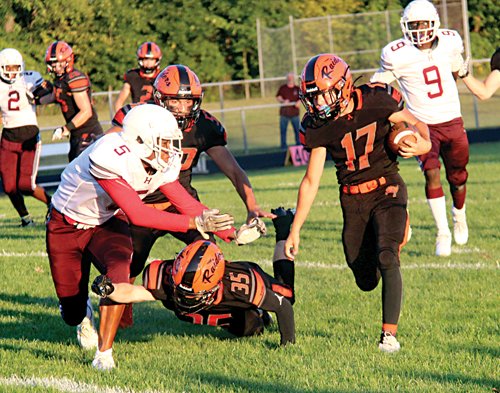 Cayden DuRall follows the block of Jacob Fuller on his way to a good-sized gain in Thursday’s contest at home versus Hamtramck.

“We really had a good crowd tonight and the student section and band really created a fun atmosphere for our first home game of the season. We will have to get back to work as we prepare for the beginning of our BWAC schedule this week.”

In Thursday’s confrontation, Almont jumped out to a 27-0 advantage after one quarter was done and widened the gap to 41-0 at the half.

When the action resumed, Almont struck with a 3-0 third quarter edge. That pushed their lead to 44-0.

For the night, Kruse (four of six for 68 yards) and Caydon Nascivera (two of three for 24 yards) took turns directing Almont’s offense attack from the quarterback position.

The Almont defense also registered two takeaways that evening. Luke Winkler (an interception) and Koval (a fumble recovery) supplied those.

Almont returns to action this Friday when it travels to Imlay City for a BWAC game. That matchup lists a 7 p.m. starting time.