DDA director thanks sponsors for their abundant generosity

The annual community event kicks off at 10 a.m. on Friday with a pair of pre-activities at the Almont District Library and Almont Historical Society.

From 5 p.m. to midnight on Friday, Almont residents and visitors are invited to gather at the refreshment tent at Almont Community Park, where the evening’s festivities begin.

Friday night’s entertainment will feature the Family Tradition Band who perform in the refreshment tent from 8 p.m. until midnight. 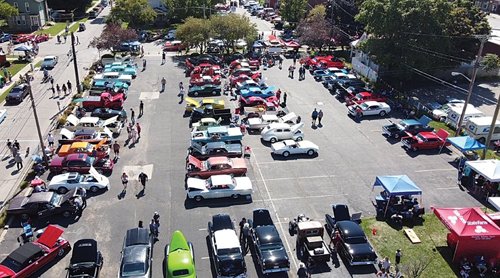 Saturday, Sept. 17 begins at 8 a.m. with a pancake breakfast at the First Congregational Church near the four corners downtown.

Depending on the weather, Schall anticipates what could be the annual event’s “best-ever” show.

“Wayne Glasser is organizing the car show and he’s doing a phenomenal job of lining up a record number of participants coming with their classic cars and trucks.

“We had 155 participants last year and Wayne’s hoping to double that number this year,” Schall said. “We already have 60 vehicles pre-registered, with many more expected to turn out on Saturday morning.”

Schall added that she anticipates large turnouts for the various other scheduled activities on Saturday morning, afternoon and evening.

She noted there will also be a host of activities and games for children on Saturday.

“We’re going to have face painter Sparkle the Clown, a magician, a bounce house and petting zoo provided by Seeded Faith Farm Rescue,” Schall said. “There’s also going to be a pickle-eating contest at 1 p.m., and two musical performances from the Royal Rube Band.”

By popular request, Schall said a cornhole tournament will take place outside the refreshment tent, starting at 5 p.m.

The live music continues at the refreshment tent Saturday evening, when Code Blue takes the stage from 8 p.m. to midnight.

“We are so thankful and appreciative of all of the support we’ve received from so many people and organizations,” Schall said. “It’s that support that makes an event like this possible.”