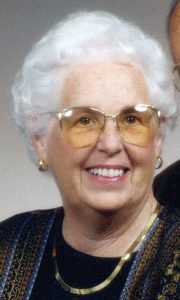 MaryLou was preceded in death by her parents, George and Mary Watkins; sisters, Melva Littman, Emma Smith and Mildred Kish, mother-in-law, Elizabeth Smith; great-granddaughter, Grace Elizabeth Zimmer; and many dear friends. MaryLou was an amazing wife and mother; she loved to care for her family, and was an exceptional cook and loved to bake delicious desserts for her family. She was an all-around great mom. Anytime anyone describes MaryLou they always say she was a very kind and generous person who had a wonderful smile. She will be truly missed.

In lieu of flowers, the family is requesting donations to the First Congregational Church of Almont.