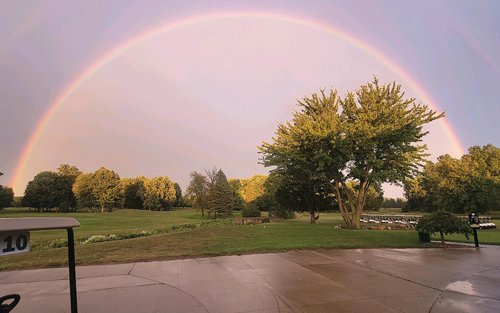 Despite the storm’s destruction, a beautiful rainbow soon lit up the sky on Monday night. This photo was captured in Arcadia Twp.

TRI-CITY AREA — Monday’s (Aug. 29) severe winds gusts of more than 70 mph, resulted in downed wires, tree limbs, and traffic signal outages across the region. As of Tuesday morning, signals along Van Dyke (M-53) from the Village of Almont, north to Imlay City, remained out of operation.

In Almont, which may have taken the brunt of the storm, Police Chief Andy Martin reported that traffic signals were out throughout the village and north to the intersection of Van Dyke (M-53) and Dryden Road.

“Most of Almont is out of power,” Martin said. “Schools are closed and we’re asking motorists to exercise patience and extreme caution.

“Motorists traveling in the area of Van Dyke and Dryden Road need to treat that area as a four-way stop until the situation is resolved.”

Horton said incidents included downed trees and wires, and carbon monoxide issues due to the use of home generators.

He added that Imlay City firefighters provided assistance to the Attica Fire Department.

In Lapeer County, Emergency Manager Jeffrey Satkowski reported there were numerous wind-related calls between the hours of 5 p.m. on Monday and 5 a.m. Tuesday.

Also in Imlay City, Police Chief Brett Selby said the city itself had been spared of significant damage from the storm.

According to the National Weather Service, a trained storm spotter recorded a wind gust topping out at 74 miles per hour just before 6 p.m. on Monday.