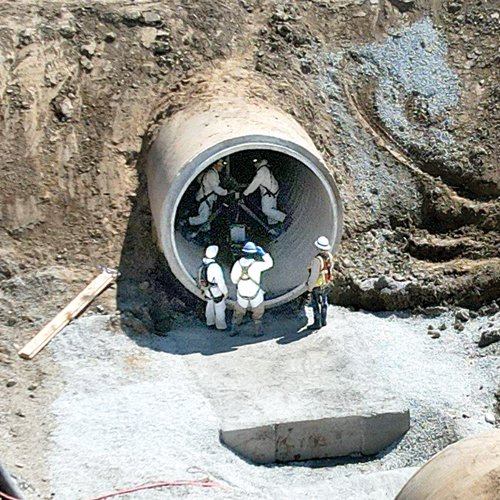 Crews are prepared to install the new pipe once all of the remaining sections arrive on site, the water authority said.

TRI-CITY AREA — Due to an issue with the replacement pipe, the Great Lakes Water Authority (GLWA) will extend the repair timeline for it’s 120 inch main in St. Clair County beyond their original goal of September 3.

Despite that setback, GLWA said their water system remains stable.

“An updated timeline for returning the 120-inch transmission main to service will be provided once all the pipe is connected and the main is fully closed,” officials said on Tuesday afternoon.

A boil water advisory was issued for Imlay City, Almont and other GLWA customers on August 13 when a break in the main was discovered. That advisory was lifted one week later on August 20 but residents in affected areas are being asked to limit their water usage. At that time they estimated the repair would take two weeks.

On Friday, another water distribution was held at the Eastern Michigan State Fairgrounds for Imlay City residents. Although the water supply—primarily coming from the city’s stand by wells— remained safe for use, city officials acknowledged “anomalies” existed in color, appearance and taste and for that reason, opted to distribute bottled water to those residents who desired it.

Later on Friday, Police Chief Brett Selby announced that the city had begun to “re-integrate GLWA water into our Imlay City water lines by repressurizing a new feed line from an alternate source for GLWA water.”

Flushing of the city lines was begun and Selby suggested that city residents check their faucets’ aerator caps, clean them periodically and run water to flush all household pipes.