“It was a nice way to start the season against a tough opponent,” Almont Coach James Leusby commented. “We had a slow start but our middle two quarters were really solid and allowed us to pull away,” he noted.

In Thursday’s battle, Almont and Marysville ended the opening quarter with zero points each. 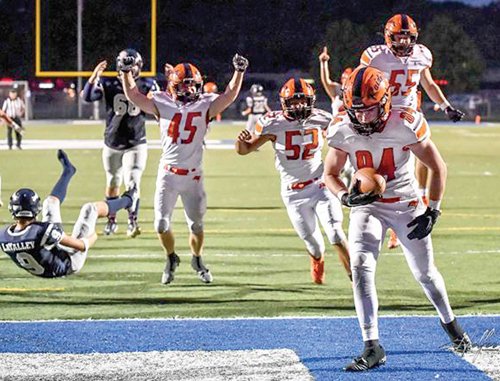 The Almont football team celebrates a fumble recovery for a touchdown by Cody Koval (#84) in last Friday’s season-opening 35-24 triumph against Marysville.

When the action resumed, Almont started to pull away. Aided by a 21-0 third quarter advantage, the Raiders padded their cushion to 28-6 with 36 minutes elapsed.

Almont then withstood a 18-7 fourth quarter rally, leaving the field with a 35-24 win.

For the evening, Trenton Kruse completed two of three pass plays for 46 yards as Almont’s quarterback. He threw no interceptions along the way.

Connor Nascivera had both Almont receptions.

The Almont defense also registered three takeaways. Caydon Nascivera and Koval (a recovery each) plus Measel (an interception) furnished those.

Almont returns to action this Thursday when it entertains Lutheran North. The non-league clash lists a 7 p.m. starting time.