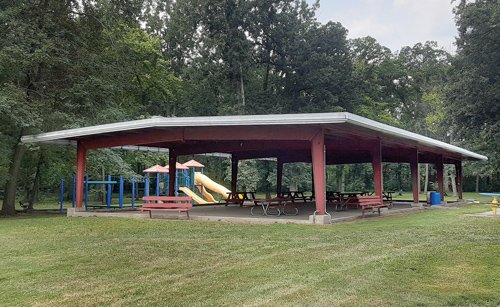 Village manager Travis Youatt believes that grant funding could help the village purchase new playground equipment at Lions Park and improve the functionality of the space.

CAPAC — The village hopes they can get a share of parks and recreation funding from the state through the new Michigan Sparks grant program.

At their August 15 meeting, the council gave Manager Travis Youatt permission to apply for funds that would be targeted toward improvements at Lions Park.

Youatt noted that the playground equipment there is worn from use and age.

“The layout of the park could be a lot more functional as well,” he added.

The $65 million Sparks program is being administered by the Michigan Department of Natural Resources (DNR) and came into existence through the Building Michigan Together Plan which was made possible by pandemic-related dollars allocated by the federal government.

The village has been able to develop Whistle Stop Park, located adjacent to the museum, using state grant dollars. They received two Recreation Passport grants in the last six years which has helped them do everything from installing playground equipment and benches to creating basketball and sand volleyball courts.

The village also intended to use the funds to construct a pickleball court but they did not receive any qualified bids earlier this year and have postponed that project until 2023.

•the council voted unanimously to declare a barn located at 3520 Capac Rd. as a dangerous building. In separate action, they voted four to one to order it be demolished within three months. Joe Nemecek voted against the motion and those in favor were Deb Hlubic, Samantha Ramirez, Lynne Mandeville and Mary Klug. President John Grzyb and council member Joe Herrington were absent.