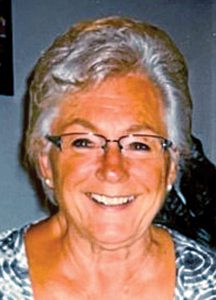 Geraldine Ann Waryas, age 77, a Dryden resident, passed away peacefully at her home on August 15, 2022 surrounded by her family. She was born March 16, 1945 in Detroit, the daughter of John and Stephanie (Malinski) Olszewski. She graduated from Pershing High School in 1963. Geri married her beloved husband, Thomas J. Waryas, on September 22, 1967 in Detroit.

Geri worked as a bookkeeper for Quest Diagnostics in Auburn Hills. She was a member of St. Cornelius Catholic Church in Dryden. Geri was proud of her Polish heritage and enjoyed making the food of her ancestors. Her hobbies included gardening, knitting, bird watching and playing cards with her family and friends. She loved the serenity of the water and enjoyed walking along the beach, collecting rocks. Geri was known by all for kindness she showed to all those around her. Her caregivers were amazed that during her worst and lowest time physically, she was still able to inspire and encourage. Geri will be missed but, her memory will live on in our hearts.

She was preceded in death by her sister, Sandra Defer; and her parents.

Be sure to share a memory or a photo on Geri’s memory page at www.muirfh.com.