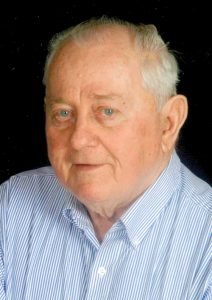 David Chesnutt, 86, of North Branch, formerly of Attica, MI died Thursday, August 18, 2022 at his home. David Marshall Chesnutt was born July 24, 1936 in Royal Oak, MI. He was the son of the late Ferris and the late Della (Weber) Chesnutt. David grew up in the Utica, MI area. David attended high school in Madison Heights, MI. He served in the U.S. Marine Corps. after high school during the end of the Korean War. David married Chereen Antonette Kuhlman on September 7, 1957 in East Detroit. David and Chereen moved from Sterling Heights to Caro and then to Attica. Chereen died on May 24, 2002. David married Mary Therese Petri Brzezinski on July 11, 2003 in Lapeer. David and Mary moved to North Branch Township in 2003.

David worked at the Ford Motor Company – Sterling Plant as a millwright for 22-plus years. He retired in 1998. He also worked as a supervisor at a small manufacturing plant in the northern part of the Thumb. David enjoyed hunting; he especially enjoyed running his dogs. He was a member of the Michigan Coon Hunters Association in Attica.

Those wishing to make a memorial contribution may direct it to McLaren Hospice, 1515 Cal Drive, Davison, MI 48423.

Please be sure to sign the online register book at www.muirbrothersfh.com to share your memories and condolences with the Chesnutt family.