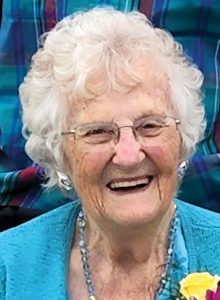 Caroline Hofmeyer, age 100, of Imlay City, MI died Wednesday, August 17, 2022 in Imlay City, MI. Caroline Bloemsma was born June 5, 1922 in Holland, MI. She was the daughter of the late Egbert and the late Gertrude (VandenBosch) Bloemsma. Caroline grew up and lived much of her life in the Imlay City area and lived for several years in Holland, MI. She attended Blacks Corner Country School. Caroline married Hubert Hofmeyer in 1980. She was preceded in death by her husband, Hubert in 2002.

She was preceded in death by her husband, Hubert Hofmeyer; parents, Egbert and Gertrude Bloemsma; brother, Peter Bloemsma; and sisters, Marian Sidell and Janet Yntema.

Please be sure to sign the online register at www.muirbrothersfh.com to share condolences and memories with the Hofmeyer family.