A total of 47 teams competed in the event.

The team opened their successful tournament run with a convincing 26-5 win against Furious Flamingos. 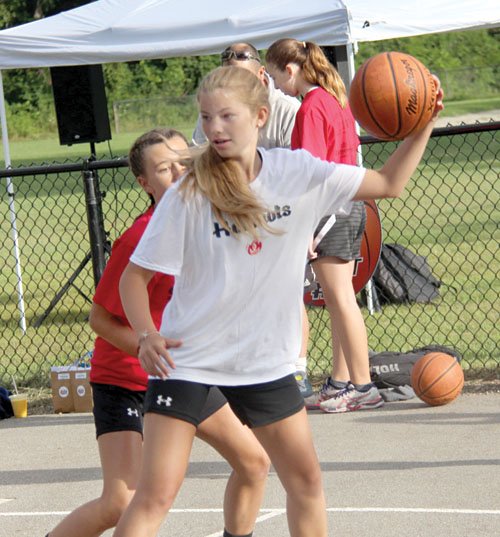 Lilly Samp, of Almont, protects the ball from a foe at the Imlay City 3-on-3 Tourney.

The team then followed it up with a 26-15 triumph against The Pound and a 25-18 win over the Pickle Bombers, assuring themselves of a number one finish.

The squad won the 18-30 division and their contests unfolded on court 5.

Oldies But Goodies (Imlay City Athletic Director Don Gauthier along with Matt Van Dyk, Greg Prendergast and Josh Gates) were the other Tri-City Area team to obtain a first.

They were the champions of the 30t bracket.

The team started things off with a 26-11 win against Three Men and a Baby.

They then handed Heat Check a 25-10 loss and followed it up with a 26-18 victory over Three Men and a Baby to close out a title-producing run.

Their contests were split between courts 1 and 8.

The squad opened tournament play with a 17-14 loss to Team ICE.

They then bounced back with a 25-0 win against Lightning Bugs; a 22-10 victory over Eagles and an 18-15 triumph against Lady Ballers.

The squad then faced Team ICE for first place honors next.

When the final scores were added up, Team ICE prevailed 12-3.

Hot Shots (Almont’s Lilly Samp, Vivian Asaro and Madison Derk along with Romeo’s Madison Repicky) found themselves among the trophy winners as well, going 3-2 that day on the way to a second.

They pitted their court skills versus seventh and eighth grade girls’ division foes on court 1.

The team went 2-3 en route to that distinction.

Their contests in the 18-30 division unfolded on court 5.

Their contests unfolded on court 7.

Quality Control (Imlay City’s Izzy Aune, Dean Aune and Yale’s Jon Schlorke) wound up with wins in one out of three contests.

They competed in the 30t division.

They participated in the high school division that took place on courts 4 and 8, respectively.