TRI-CITY AREA — The City of Imlay City and the Village of Almont remain under a boil water advisory due to Saturday’s (Aug. 13) Great Lakes Water Authority water main break about one mile west of GLWA’s Lake Huron Water Treatment Facility.

Crews isolated the break to a 120-inch water transmission main that provides treated water to more than 935,000 residents in 23 communities.

On Sunday, Aug. 14, Michigan Gov. Gretchen Whitmer declared a State of Emergency due to the incident for Lapeer, St. Clair, Oakland and Macomb counties.

Lapeer County Emergency Manager Jeffrey Satkowski reported late Saturday that the boil water advisory would remain in effect for two weeks while repairs and decontamination of the water system are completed. 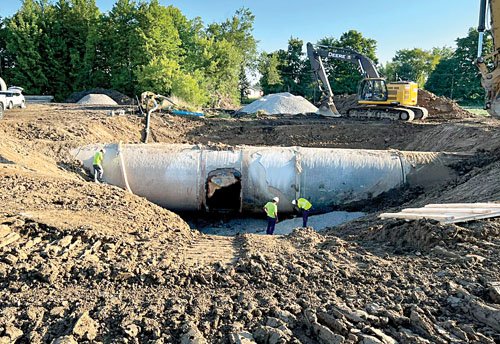 On Tuesday, the GLWA reported that engineers determined an additional 48 feet of replacement pipe will be needed for the water main repair but it will need to be manufactured and then delivered to the site. As a result, the repair time line was extended by one week for a total of three weeks.

Satkowski said GLWA originally estimated it will take about one week to repair the break and restore the flow; and another week to decontaminate the system.

“Once the repair is done and the water is clean and safe, GLWA will announce that the boil water advisory can be lifted,” Satkowski said.

While the advisory is in place, Imlay City DPW Supt. Ed Priehs is encouraging residents to boil water for at least one minute before using it for drinking, washing dishes, brushing teeth and preparing food.

He added that the city is considering introducing chlorine into the city’s water system as an added safety measure.

“We’re going to do everything we can to ensure the safety of our residents.”

Meanwhile, Priehs is asking residents to use as little water as is necessary until repairs are completed and the water is tested and deemed safe for public consumption.

“Because we may experience low water pressure, we are asking residents to avoid using water for lawn sprinkling, car washing or any other unnecessary use.”