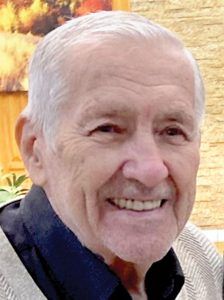 Arthur “Art” Kanaziz Sr., age 88, of Imlay City, MI died Saturday, August 13, 2022 at his home surrounded by his loving family. Arthur James Kanaziz was born October 29, 1933 in Ferndale, MI. He was the son of the late John and the late Stella (Kowalski) Kanaziz. Art grew up and attended school in the Detroit, MI area. Right out of high school, he joined and proudly served in the United States Army from 1951-1954 during the Korean War. He married Barbara “Barb” Davis on January 18, 1954 in Wyandotte, MI.

He was employed as an electrician by Jones & Laughlin Steel Company in Detroit, MI and Cleveland, OH for 30 years before retiring.

Art and Barbara participated in many Imlay City Chamber of Commerce and Rotary programs. He was a member of St. Cornelius Catholic Church in Dryden and Sacred Heart Catholic Church in Imlay City. Art enjoyed raising animals: cattle, swans, geese, chickens, ducks, pigeons, peacocks and birds of all sorts.

He is survived by his daughter, Michele Woodland of Brooksville, FL; sons, Arthur (Renea) Kanaziz Jr. of Leesburg, FL, Charles (Mary) Kanaziz of North Branch, MI and Christopher Kanaziz of Slidell, LA; and many grandchildren and great-grandchildren.

Art was preceded in death by his wife, Barbara Kanaziz in 2017.

Please be sure to sign the online register at www.muirbrothersfh.com to share condolences and memories with the Kanaziz family.