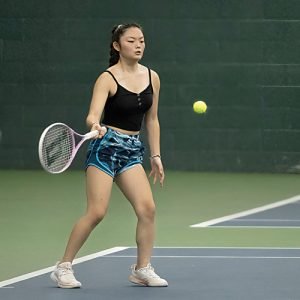 Imlay City’s Maggie Muehleisen took second in her flight at the Robinson Tourney.

Wetzel opened his tournament stint Wednesday with a 4-1 win against Landon Kamendat.

Later that day, Wetzel picked up a 4-1 victory over Conor Heimbach.

He then followed it up with a 4-0 triumph against Evan Cummings; a 4-1 win over Andrew Barnett; and a 4-0 victory against Yanni Kasparian.

Those outcomes netted him a spot in Sunday’s title match where he squared off versus Barnett.

Later that day, she bounced back with an 8-5 win against Emma Shafer.

That earned her a rematch with Faust in Sunday’s flight title match.

When the final scores were tallied, Faust registered a 6-2, 6-1 triumph.

Playing in the Girls Singles 3 Flight, Sapp started things off Wednesday with a 6-0 win against Ava Cousino and a 6-5 victory over Lauren Aragones.

That was followed Friday with a 5-6 loss to Liz Pardy and a 0-6 setback to Elizabeth Hoff.