IMLAY CITY — The inaugural Imlay City Summer Fest is nearly here. Organizers are putting the finishing touches on the two-day schedule of events which kicks off this Friday, August 12, at noon with an opening ceremony and concludes Saturday evening with a Teen Dance.

The Summer Fest is sponsored by the Imlay City Area Chamber of Commerce.

“This year we are bringing back some of your favorite ‘blast from the past’ attractions and many new fun and exciting events and contests,” Chamber Executive Director Chris Bishop said. 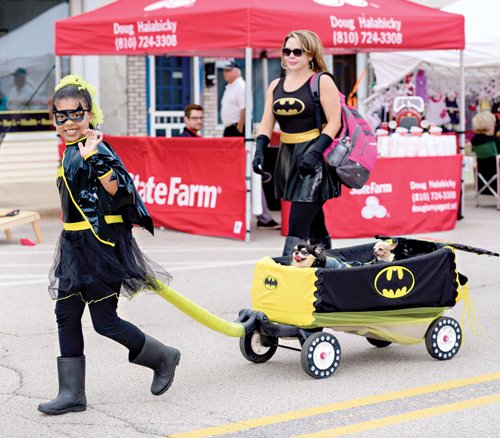 Costumed kids and adults and their animal companions will be the stars of the show at Saturday’s pet parade.

Some of those traditional events returning include the Beautiful Baby and Toddler Contest, fireworks on Friday night at dusk, Saturday’s 4 p.m. parade, live entertainment, a pet parade, Outhouse Races and much more.

There’s an array of new attractions for youngsters and their families to enjoy plus a scavenger hunt and CosPlay Contest.

All the festival’s events will be centered in downtown Imlay City. The Main Stage will be located at Third and Main streets and the Second Stage will be situated at Almont Ave. and Third St. The Beverage Hall, staffed by the Imlay City Rotary Club, will be located within the former fire hall on Third Street and many of the children’s events can be found in Lamb Steele Park.

Vendors will be stationed in the Farmers Market area and along Third Street.

Once again, Imlay City Historical Society members will be serving up pie, ice cream and history from the museum on Main Street both days as well.

Local dignitaries and organizers will welcome guests at the opening ceremony and local performer Paisley Grace will sing the National Anthem. The winners of the Beautiful Baby and Toddler Contest will also be announced at that time.

Later that afternoon two historical presentations will be made from the Main Stage. Imlay City Historical Society President Carla Jepsen will detail Imlay City’s history starting at 12:30 p.m. and at 1:30 p.m. local historians Lynn Nolin and David Norris will talk about Imlay City’s ties to the Civil War.

Eating contests on tap for Friday include pie at 2 p.m. and sliders at 5 p.m.

Friday afternoon in the gazebo local author Jacklin Kinzer will host a series of Dog and Bear tea parties with themes ranging from the armed forces to a beach celebration.

Participants will vie for prizes in the Talent Show which begins at 6 p.m. on Friday.

Friday night’s performers include Sonic Honey and Billy Gunther and the Midwest Riders.

A corn hole tournament, held both nights, begins at 7 p.m. at the Rotary Beverage Hall.

At dusk, a fireworks show will light up the night sky from the Eastern Michigan State Fairgrounds.

The day starts with a Car Show in the Imlay City Police Department’s parking lot starting at 10 a.m. Other events on Saturday’s schedule include a performance by The Flint Pipe and Drum Band, a pet parade, and a Jaws of Life demonstration courtesy of the Imlay City Fire Department.

Both pickle and taco eating contests are on tap and following the parade at 4 p.m. participants are encouraged to get in on the fun in Outhouse Races and a CosPlay contest that both begin at 6 p.m.

New this year is a Teen Dance happening at Third and Main Event Center where a DJ will be playing music and mocktails will be served.

The Rotary Beverage Hall will serve patrons until 1 a.m. that evening.

“We would like to thank our Chamber members and business owners, our festival committee, volunteers and the community for their support and hard work,” Bishop added.

The Chamber of Commerce’s Information Barn will be located in the Farmer’s Market Area at Third and Main streets. There, guests can pick up a Summer Fest schedule of events.