Lemke to take talents to Mott 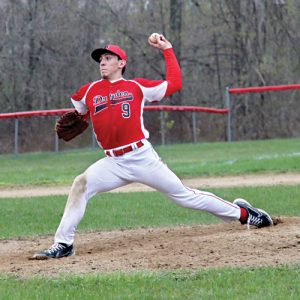 Dryden’s Zack Lemke delivers a pitch to home plate during a game at home this past season. Lemke will continue his playing days at Mott Community College.

Lemke, a lefthanded pitcher, is coming off an outstanding senior year which saw him amass a 10-3 mark with a 1.57 ERA.

Lemke ranked second on the Dryden ballclub and third among Tri-City Times All-Area first team honorees with a .380 average.

He provided Dryden with 17 singles, eight doubles and two triples in 71 at bats.

He wrapped up his second year at the varsity level as an All-North Central Thumb League Stars Division and All-District first team choice.