Hunsaker to take skills to SVSU 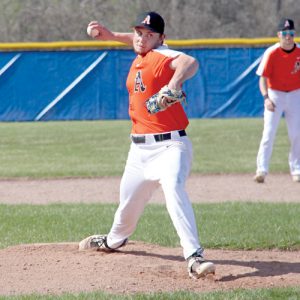 Brandon Hunsaker fires a strike to home plate during a game this past spring. He will play at SVSU.

He is coming off his final high school campaign where he put together a 1-2 record, including a 1.81 ERA.

He wound up second on the Almont squad and eighth among Tri-City Times All-Area first team honorees with a .319 average.

Hunsaker collected 13 singles and two doubles in 45 at bats.

He also contributed a .448 on-base percentage, 11 runs and eight walks to Almont’s cause.