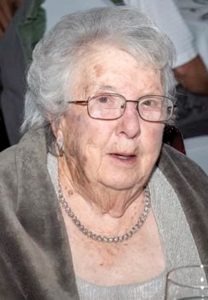 Betty Vohs, age 94, of Imlay City, MI died Monday, August 1, 2022 at home surrounded by her loving family. Betty Jane Daniels was born July 30, 1928 in Royal Oak, MI. She was the daughter of the late Grant and the late Ethel (James) Daniels. Betty grew up and attended Royal Oak High School. She left high school to work at Kresge Dime Store. She married Donald Vohs on September 1, 1951 in Warren, MI. She was preceded by her husband, Donald, on August 3, 2009. Through the years Betty and Don lived in Warren, Sterling Heights, Royal Oak, and they retired to St. Helen, MI in 1987. She moved to Imlay City in 2007.

She was a homemaker, raising her family. While she lived in St. Helen, Betty worked in the bakery of the IGA. Betty was a member of the Seven Ponds Nature Center ‘Stingers’ ladies fundraising group. She had a huge garden and enjoyed canning vegetables. Betty liked to go to garage sales, RV camping, spending time with her grandchildren and great-grandchildren and was a great supporter of the Imlay City High School Equestrian events in which her grandchildren participated.

Those wishing to make memorial contributions may direct them to the Vohs family for distribution to several different organizations.

Please be sure to sign the online register at www.muirbrothersfh.com to share condolences and memories with the Vohs family.