A full house gathers at hall to celebrate senior citizens

BERLIN TWP. — How many senior citizens does it take to fill the Berlin Township Hall?

Probably not too many more than the 70 or so seniors that attended the July 26 special luncheon to honor some of the township’s oldest citizens.

Coordinated by the Berlin Township Seniors Group, the event included some fine cuisine from Achatz Catering, live music by Bill Bundy and Ray Govaere, while conjuring up stories and memories from days gone by.

While some of the guests could still be considered youngsters (60s and 70s), a larger portion were in their 80s, 90s, and a several nearing the century mark.

Among the special guests was Irene Cehr, who recently attained the age of 100.

Born on Feb. 8, 1922, Irene was joined by family and friends that included Sandra Kay Cehr, Cheri Karolak and Alvina Frisch. 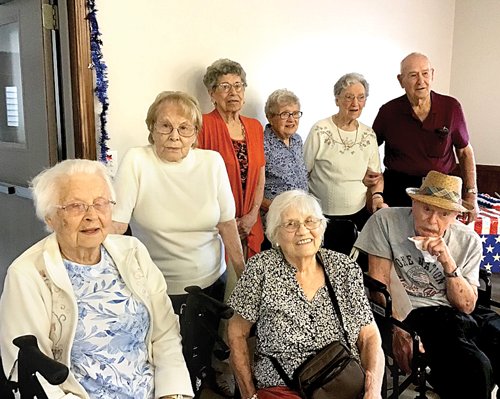 Those in attendance who’ve celebrated nine decades or more of life assembled for a photo.

Lifetime resident Earl Ellis was eager to exhibit his youthful exuberance while cutting a rug on the dance floor with several partners.

The crowd enjoyed the familiar musical selections provided by Bill Bundy on lead vocals and guitar, and his partner Ray Govaere on accordion and piano.

The duo started playing together as kids and have continued to entertain audiences at senior centers, birthday and anniversary parties, and at various venues throughout the area.

“We’ve been playing together since about 1980,” Bundy recalled. “So I guess we’ve learned to play a few songs along the way.”

While just about everyone of age was in attendance, Berlin Township Senior Director Sandy Dzieszkowski acknowledged a couple who were notable by their absence.

“Unfortunately,” she said, “seniors Kate Worden and Andy Duke were unable to be here, and they were missed.”

Dzieszkowski noted that for some seniors, it was the first time they had gotten together since before the COVID-19 pandemic.

“It was so nice to see all the smiles on people’s faces,” she said. “Some of them have not been able to get out to have fun in a long while.

“It was satisfying to be able to see them reconnect, reminisce and have fun together again.”

Dzieszkowski acknowledged the efforts and support of the staff at the Armada Nursing Home, who transported and accompanied three residents of the facility. “It was wonderful to see that effort on their part,” she said, adding that she hopes more will return to take part in future senior activities.

The Berlin Township Senior Group meets the fourth Tuesday of the month at noon for pot luck lunches and social interaction.

The Berlin Township Senior Center is located at 744 Capac Road in the Village of Allenton.