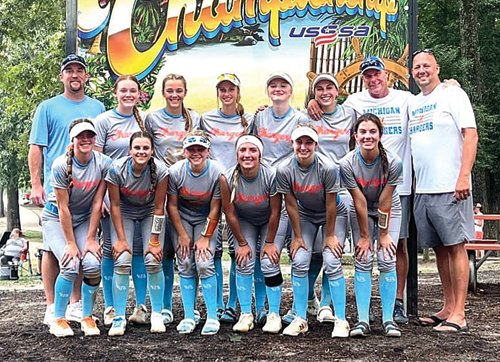 CAPAC — The Michigan Chargers 16U softball squad, which counts Capac’s Skielar Tesnow among their ranks, earned a first-place finish at the USSSA Eastern National Championships this past week.

The Michigan Chargers started their title-producing path with a 10-0 win against Lazers 16U Blue on Monday, July 25.

Tuesday, July 26 Michigan Chargers 16U softball team improved to 4-0 with a 6-5 victory over Bethel Blast; an 8-1 triumph against Rapidfire 16U; and a 7-0 win over Firebirds 16U Vican.

From there it was on to bracket play.

Michigan Chargers 16U softball team then picked up a 6-1 victory against Diamond Elite Haiber 16U on Wednesday; a 5-3 triumph Thursday over Beacon Extreme 16U; and an 8-3 win against Diamond Chix Pink-Cancilla 16U on Friday.

They then bounced back with a 5-3 triumph against Adirondack USSSA Pride 16U and a 14-12 win over PA Rebellions16U squad.

Those outcomes placed them in the championship encounter where they squared off versus PA Rebellions 16 U squad. That battle drew to a close with Michigan Chargers 16U softball team up by a convincing an 11-3 count, ending with a run by Tesnow.