Sliman, Kaminski to run for SC4 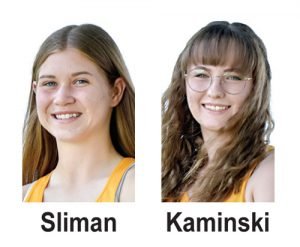 North Branch High School is where the meet was contested.

She also supplied a first at the Columbus County Park-based Get Your Toes Wet Invitational; took second at the Evan Gardner Invitational in Durand; a Blue Water Area Conference Jamboree Meet hosted by Richmond (at Goodells); a Blue Water Area Conference Jamboree Meet hosted by Almont; obtained a third at the Birch Run Fall Classic; furnished a fifth at the Dryden Invitational; notched sixths at the Clawson Watermelon Invitational and Corunna Earlybird Invitational; generated a seventh at an Algonac-based Division 2 regional; collected 11ths at the Algonac Classic Run and Hanson’s Invite at Freedom Hill County Park; plus added an 83rd during the Division 2 state meet at Michigan International Speedway in Brooklyn.

Kaminski had an outstanding 2021 campaign as well.

She was at her swiftest Saturday, October 30 when she ran a 21:51.9 clocking for 22nd at an Algonac High School-based Division 2 regional.

Marysville City Park is where the action unfolds.