TRI-CITY AREA — It’s been a memorable year for Abbey Nascivera. The 18-year-old graduated from Almont High School in June and came away from the 2022 Eastern Michigan State Fair with some of the highest honors as a livestock exhibitor.

“When I got reserve with my steer I was the happiest person alive at that moment,” Abbey said.

She’s been showing beef animals for the past five years but this was just her first time at the fair as a swine exhibitor.

“For getting overall showman and overall market hog felt so crazy because it was my first year,” she said.

Working with her animals twice a day, every day, leading up to fair gave her a lot of confidence in the show ring, she believes.

Cheering her on throughout the week were her family and friends. 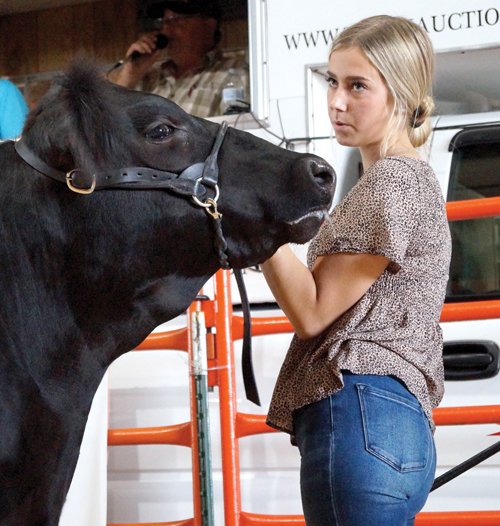 Abbey with her steer in the auction ring.

Kruse said Abbey’s family thought she might step away from the show ring after Abbey’s dad and Andrea’s brother, Rodney Nascivera, died suddenly in 2019.

“She was at a steer show at Michigan State University when he passed away,” Andrea said.

“But she kind of went the opposite way and really dedicated her time to her animals.”

“To overcome her grief and accomplish all of this has been great to see,” Jennifer Nascivera said.

“She’s given it her all and it’s pretty evident that she’s in love with livestock and farming.”

Abbey said she wore a bracelet with her dad’s handwriting on it while in the show ring and thought of him often.

Abbey credits her friend Rilynn Lindsay, Rilynn’s family and the Albrecht family for their support and help.

It was Rilynn who threw a special birthday party for Abbey at the fair last week too. Abbey turned 18 on July 20.

Currently Abbey serves as a junior fair board member and belongs to the Lapeer County FFA chapter.

She’s enjoyed getting to know new people and make new connections as a junior fair board member.

“Being in FFA has taught me leadership skills and I’ve learned how important agriculture really is,” she said.

Abbey is still undecided on her future plans but she intends to eventually attend community college and study ag business. At the conclusion of the 2022 fair, she received a financial boost to make those plans reality when she was named the recipient of the Tina Novotney Scholarship presented by Lapeer County 4-H.