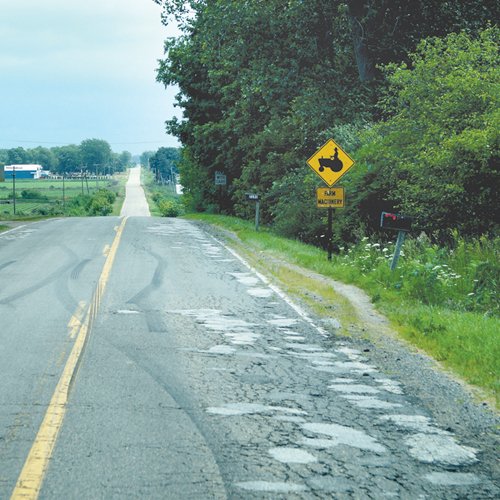 The Shaw Road project qualified for the grant because of the farms and business located on it.

The grant, applied for by the Lapeer County Road Commission on behalf of Goodland Township, is funded by the American Rescue Plan and will require local matching funds. The award was made by the federal agency’s Economic Development Administration (EDA).

“This grant will allow for increased commercial vehicle capacity in support of business expansion and economic resilience on a critical access route to the Detroit area. The EDA investment will be matched with $335,882 in local funds and is expected to create 75 jobs, retain 226 jobs and generate $6 million in private investment, according to grantee estimates,” the agency said in a release.

Secretary of Commerce Gina M. Raimondo said the investment “will strengthen the food supply chain in Southeast Michigan and enhance business capacity in the region, helping to boost U.S. competitiveness.”

Senator Gary Peters, whose comments were also included in the release, referenced the importance of food production in the state’s overall economy.

“That’s why I was proud to help secure this funding, which will support needed upgrades to Shaw Road in Goodland Township and bolster critical food supply chains to Southeast Michigan. This will not only create jobs for Michiganders but ensure farmers throughout the region can safely and efficiently distribute their products.”

The EDA’s American Rescue Plan Economic Adjustment Assistance program made $500 million in Economic Adjustment Assistance grants available to American communities. It’s the EDA’s most flexible program, and grants made under this program will help hundreds of communities across the nation plan, build, innovate, and put people back to work through construction or non-construction projects designed to meet local needs. The $3 billion program funding will be awarded on a rolling basis through September 30, 2022.

Shaw Road qualified for the federal program because of the businesses located on it, including a sod farm, produce growers and a pallet company. Township officials said they were required, as part of the grant application, to have those businesses endorse the application.

The work will include adding a turn lane, widening the lanes and rehabilitating the road’s surface.